Yep, I have to admit it was a little strange seeing another photographer at work in my studio, but fascinating all the same to see how he expertly approached the task in hand and to witness how this photoshoot unfolded.

And all for a very good cause.

It all came about a couple of weeks before Easter when I got a call from Michelle at Caffeine Communications http://caffeinecommunications.co.uk/ She was looking for a studio space in the Romsey area to use for a photoshoot with Charlie Dimmock which was to take place on Easter Monday. As I was closed over the holiday weekend and the studio was going to be free, I was more than happy to offer my studio space.

Michelle explained that Charlie was fronting the new campaign of The Myfanwy Townsend Melanoma Research fund (MTMRF). The campaign is called Watch Your Back! and is aimed at men, in particular gardeners, to review their sun protection habits and get their backs checked often for any warning signs of melanoma. You can read more about the campaign here on their blog http://www.melanoma-fund.co.uk/whats-new-for-spring/  You’ll also see in the post the beautiful picture of Charlie from the session they ultimately chose for the campaign – which you may well see in a garden centre near you after the end of April as the campaign gets underway.

On the morning of the shoot Lee and I arrived bright and early and soon Paolo, the photographer, http://www.ferlapaolo.com/ and Shona https://twitter.com/ShonaAdeleWhite , the hair/makeup artist arrived, having travelled from Bath, followed shortly afterwards by Michelle.

As things got underway, I took a few shots on my phone, as well as a couple of video snippets. 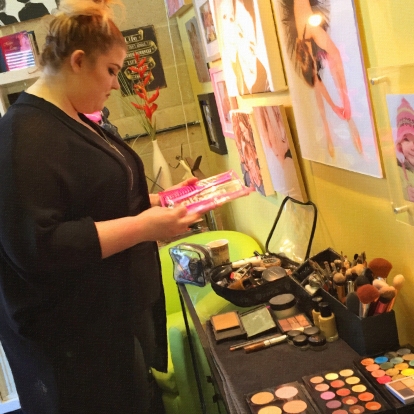 Shona making sure everything is to hand 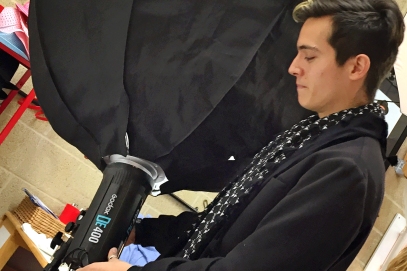 …whilst Paolo sets up his lights

Paolo had brought along his own lights and equipment and I found it very interesting to see how he was setting everything up as he chatted through the brief with Michelle. 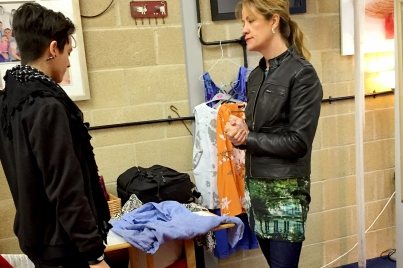 Interestingly, after trying out several different angles using Michelle as his test model, he decided he was going to use the studio the opposite way round to my normal set up for his first shots, incorporating the white table, which usually sits unobtrusively to the side of the room, to use as a prop in the pictures. The images automatically synced to Paolo’s laptop so he and Michelle could see them straightaway and decide if they were exactly what was needed. 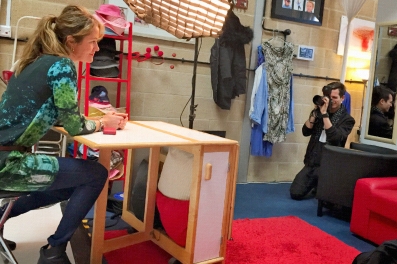 Paolo decided against shooting the table scene this way round … 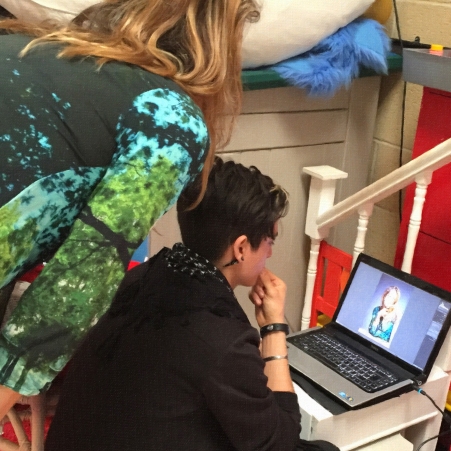 …when he reviewed the resulting images with Michelle

So the table was placed on the edge of the backdrop and Paolo set up his lighting so he could take pictures from the backdrop side of the table. Which was actually very effective.

Lee took Michelle to a local garden centre to buy a few props so it was down to me to stand in for a few more test shots. 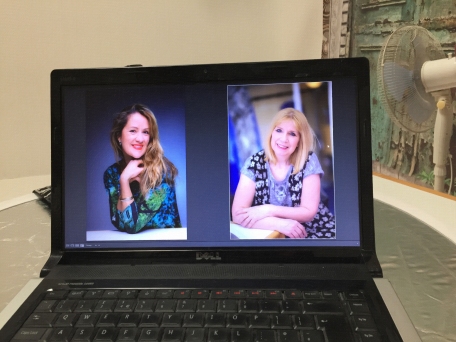 Test shots of yours truely with the studio area behind, compared to the shot of Michelle taken with the white backdrop behind and the use of a coloured gel

In the meantime, Charlie Dimmock had arrived and Shona had made a start on her hair and makeup in the reception area.

It made a refreshing change to sit back and watch everyone doing their thing and seeing it all come fantastically together. No pressure, just had to keep the teas and coffees flowing!

Once Charlie was ready, the first shots were taken, with her sitting at the table, and various props such as lilies, plants, garden gloves,  were experimented with for some of the shots. 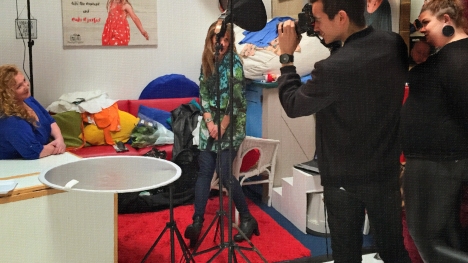 Once these shots were in the bag, there was a quick change of top for Charlie whilst Paolo changed the lighting setup to the other direction, now facing back towards the backdrop. He took some shots of Charlie to the front of the backdrop, then moved his lights to the back, and asked her to lean against the back wall, and he photographed her in this very relaxed pose. These shots were especially stunning and it was no surprise that it was one of these that was selected for the campaign. 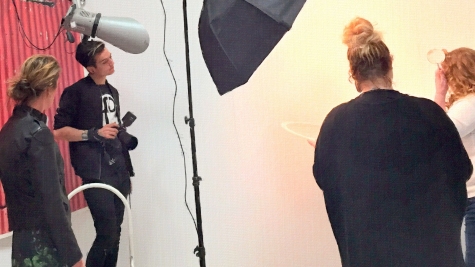 Leaning against the backwall … 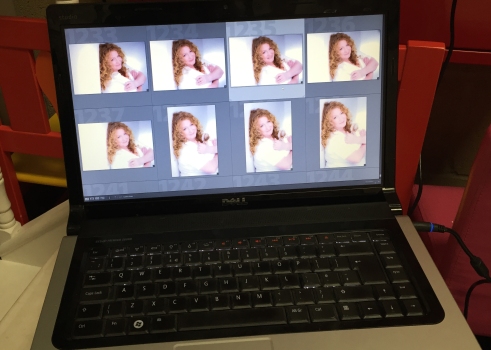 …and some of the resulting shots

We then headed into the Basepoint Centre car park, fortunately relatively empty due to the bank holiday, for some outdoor shots. We moved one of the wooden benches to the front of a leafy area to the far end of the car park, which looked rather effective and rural in the pictures, with a few plants and pots strategically placed on the bench where Charlie sat.

It was a pretty windy day, but fortunately blowing in the right direction so Charlie’s gorgeous long tresses blew gently backwards. A wind machine couldn’t have done the job better! The sun made an appearance too – and thankfully no rain!

Haha it may look like a glorious sunny day in the stills but this little snippet shows just how blustery it was!

As you can see, it was quite a team effort – and no mean feat to stop those reflectors tossing and turning in the wind! 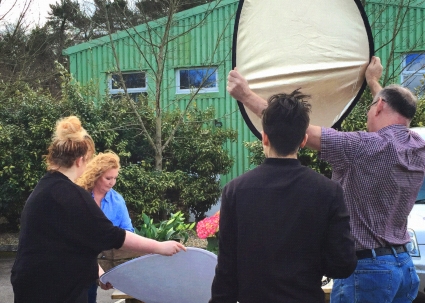 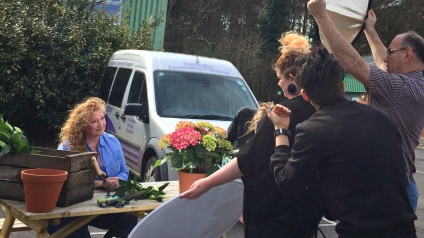 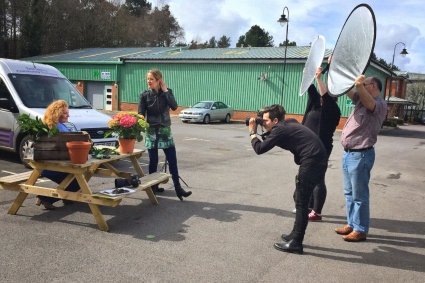 And time for a quick phone photo opportunity… 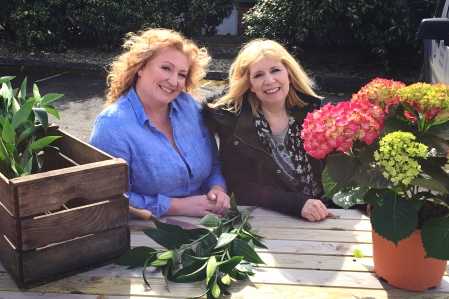 A couple of final shots final shots were taken of Charlie leaning against one of the trees and then it was a wrap!

Back in the studio Michelle took this pic of the “team”… 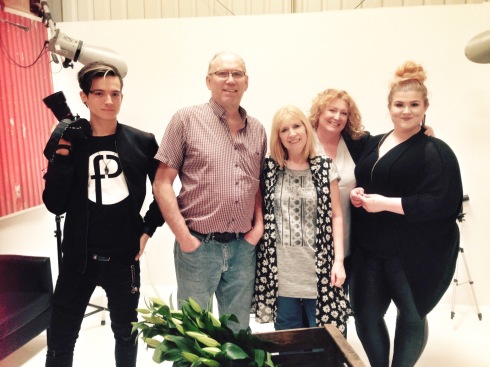 1pm and time to say our goodbyes. It had been such an interesting morning; something a little different to the norm. Lee and I really enjoyed seeing how these very talented folk brought it all together, and seeing Paolo’s amazing pictures. Absolutely incredible.

Our thanks to all and wishing the campaign huge success in getting this important message across.